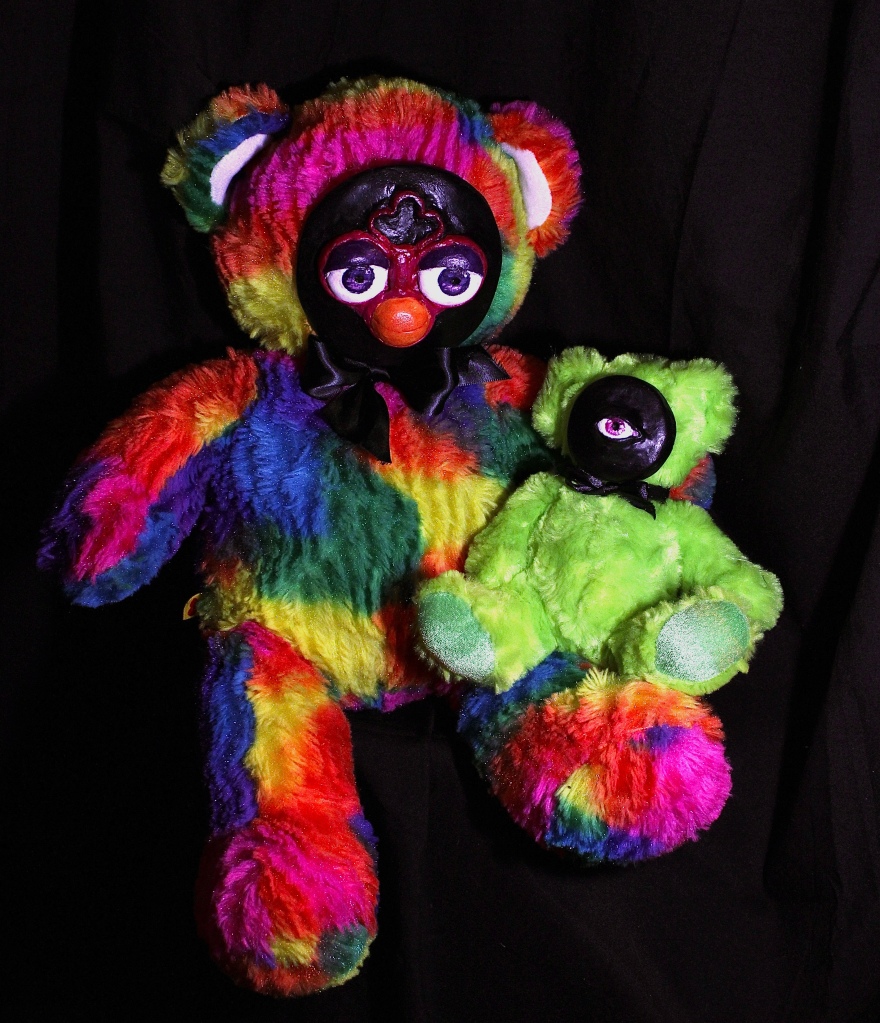 Another development of my work is the 3D manifestation of the odd things I’ve been working on in 2D media. Like the work featured in my last blog post, two out of the three of these are weird Furby creations inspired by the internet phenomena of odd-body Furbies. Another internet phenomenon that has inspired my 3D work here is modifying stuffed animals, more specifically giving them new faces made of clay. I was also inspired by the idea of taking something cute and harmless, like a stuffed animal, and turning it into something that might be unsettling in a humorous way.

My first foray into making these was through the most common path of modifying stuffed animals with some type of clay. Before I got started, I sketched out plans for what I wanted my stuffed animals to look like. After that, I started sculpting the faces. My biggest mistake with this project was that I chose to use model magic, which is very hard to work with and ‘dries’ to a “old marshmallow-like” consistency. I made do with it and forced it to work for this project, though. After I let it dry as much as I possibly could, I painted it with matte acrylic paints and sealed it with a satin acrylic varnish. In order to attach the finished faces, I cut off the faces of the teddy bears and glued on the clay faces in their place with a two-part epoxy.

I’m not 100% satisfied with the finished stuffed animals but that’s mostly because of the materials I chose to use. I still really enjoyed making these, and I love how unsettling they look. Furbies don’t scare me, but the Furby face I made legitimately creeped me out as I was making it and I thought that was hilarious.

This is my most recent project, and as you can see, it ties in more with my Furby paintings. For this one I decided to try using felt, and I enjoyed using that a whole lot more than model magic. The process for this was pretty similar to my last project, except I had to cut out and assemble pieces of felt. After gluing them on to the zebra plush, I sewed the outer edges of the felt down to secure it further and make the plush

I’m very happy with how this plush turned out. I enjoy how it’s a lot more huggable even though it’s still a bit creepy like the last two. Also, I’m not sure what it is, but something about the flat-faced silhouette cracks me up.